I can’t believe it has been a months since I last updated this learner driver tips blog, but anyway let’s finish discussing the last few sections of the driving test form – sections 23 to 27. 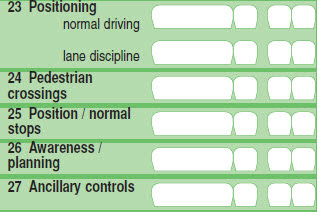 23. Positioning – this is divided into two sections:
Normal driving position – faults here would include driving too close to the kerb or over the white centre line when you don’t need to be. But it would also include cutting across the normal road position when going ahead at a roundabout (without lane markings). It continues to surprise me that almost all roundabouts have lane dividers on approach (green arrow) and almost none have them on the roundabout (red arrow). The roads in the UK are very good but far from perfect. My tip for this one is to aim for the yellow bollard (in front of the car in this pic) and you will be remaining in the left lane.

Lane discipline – This one seems to be exclusively for roundabouts that DO have lane road markings on the roundabout. By definition there will be less test failures for this one, since most roundabouts don’t have lane markers. However in my experience a lot of new drivers are not comfortable on these roundabouts because they are generally large, multi lane and confusing to the untrained eye. Maybe I should cover these in a separate post sometime soon.

24. Pedestrian crossings – fairly obvious this one. Failure to give precedence to pedestrians on a pedestrian crossing. Non-compliance with lights at Pedestrian Controlled crossings. The trick here is to make sure that you are alert and if you see a crossing, expect that there may be someone walking towards it. The hazard perception test is very good at promoting this approach – look for a hazard and you will be not be surprised it it develops into a problem.

25. Position for normal stops – during an average driving test, you will be asked to stop on the left several times. You need to choose somewhere that is safe, legal and convenient. A few bad examples are opposite a junction, on double yellow lines and blocking someone’s driveway. Although every driving test will include a stop that requires you to move off at an angle by parking reasonably close to a parked vehicle. For this element the examiner by advise you to “not worry about blocking a driveway on this occasion. This is because they want you park in particular position to do the angle start.

26. Awareness and planning –  this can cover many, many situation, in examiner speak this is what they are say “failure to judge what other road users are going to do and react accordingly”. A few examples that I recall from driving test:

A coach (not a bus) has stopped on the left and the driver has pulled up close to it and doesn’t realise that it is going to be there for a while….

A vehicle is clearly giving away its priority let’s say on a roundabout because their exit route is not clear. the driver is unaware of why this is happening and remains stationary, meanwhile the traffic behind is becoming increasingly impatient…..

A high sided heavy goods vehicle is waiting to pass under a low bridge and needs to be in the middle of the road and the driver doesn’t know and doesn’t react….

Just like all faults in a driving test, I don’t mean to suggest that the three above examples would be a test failure. It really depends on the context on the situation, how long it takes for you to work it out, how much a problem that is. This is discussed in an earlier blog post.

26. Ancillary controls – this is to do with windscreen wipers heater controls etc. So an example might be it is pouring with rain and the driver doesn’t know how the wipers work or doesn’t think they are necessary and the examiner know they are required. Same would go for a misted windscreen or similar.

Well that’s it for now and remember if you want to book an intensive course in Lichfield please click the link. The same goes for Leicester

For details of our summer schedule

You can find out more about which cookies we are using or switch them off in settings.

This website uses cookies so that we can provide you with the best user experience possible. Cookie information is stored in your browser and performs functions such as recognising you when you return to our website and helping our team to understand which sections of the website you find most interesting and useful.

Strictly Necessary Cookie should be enabled at all times so that we can save your preferences for cookie settings.

If you disable this cookie, we will not be able to save your preferences. This means that every time you visit this website you will need to enable or disable cookies again.